The Tower of London


I’m going to write about the Tower of London, a massive castle complex in (can you guess?) London.  It is important because it was the residence of the kings of England. The Tower, and the neighboring Tower Hill, is a place where many famous people were put to death, including Anne Boleyn. Besides this rather grim purpose, though, it also holds the Crown Jewels of England. It is definitely one of my favorite parts of Britain. If you're interested in Britain, click here for my other articles

Why you should go:
The three best parts of the Tower of London are the White Tower, the Crown Jewels, and the (nearby) Tower Hill. My favorite of these, the White Tower, is the innermost and oldest part of the extensive Tower complex. I like the small museum inside, containing period weapons and armor. Admittedly, I didn’t see the Crown Jewels because I was short on time. Still many tourists visit them every year and I would suggest going. Lastly, the Tower Hill is the official execution place of London (not anymore, mind you) and is where most notorious criminals were put to death.  There is a small plaque on the ground that lists some of those killed.


The primary reason I wanted to go was to see the enormous medieval castle, which I think is something most of us could relate to. However, there are also plenty of entertaining stories from London’s history that took place here, and it is quite memorable to see where these occurred. The final reason you should go is that The Tower is important to British history, and you all know how much I like history. The Tower was originally built by, if you can believe it, the French kings of England.  Anyone who doesn’t see the Tower of London on their trip to England can’t claim to have really seen England.


How:
I advise going with a guide, just because of the sheer volume of history at the site. Guides can keep you interested with the amusing tales that have taken place in the Tower, and some darker ones too. More importantly, a guide can helped me tie these stories to the specific locations in which they happened better than you ever could have with a guidebook. My favorite guide for all of London is John Gowing, at www.gowingguiding.co.uk. He gave me a great tour of the Tower and a great explanation of its history. I spent roughly two hours at the Tower, but I wasn’t able to see everything fully. You should probably leave 3-4 hours, depending on how long you are in London for. Make sure to pick up a map at the gate, (if they still offer them, I haven’t been there for a while). I loved my tour of the Tower of London, and I hope you do too.

I’ll warn you about the pictures, though. For those of you that have read my Middle East series of posts, I look pretty young in these Europe ones!

After Going (not Gowing): 9/10
Reason for Score: It is a very impressive place and has quite an interesting history

Email me at michaelworldtravel@gmail.com with any questions or comments. For more info on this topic, read my other posts on Britain here. 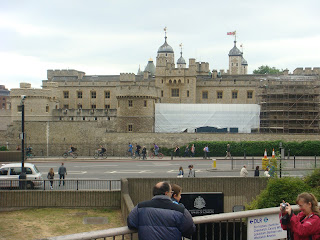 The labyrinthine Tower of London, with banners still flying for the benefit of the tourists. 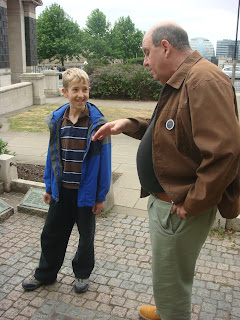 Me talking to John Gowing, our guide for London 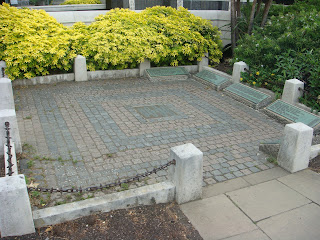 The harmless-looking Tower Hill, where hundreds were executed. 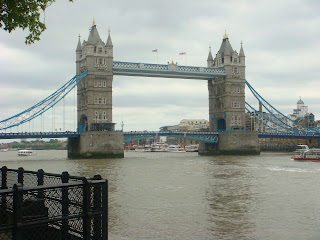 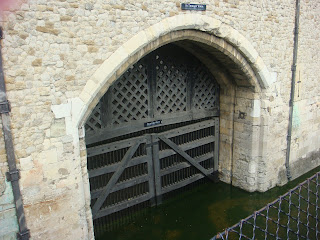 The infamous Traitor's Gate, where prisoners were brought in by boat 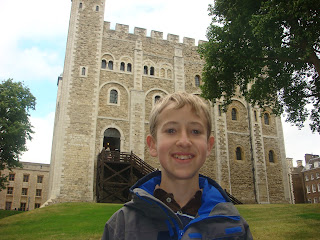 The White Tower and I 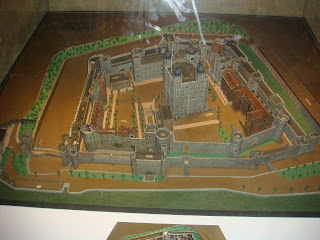 A detailed model of the Tower and its environs 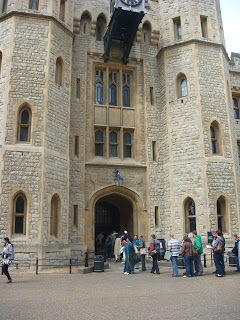 The building that houses the Crown Jewels,,, and the huge line 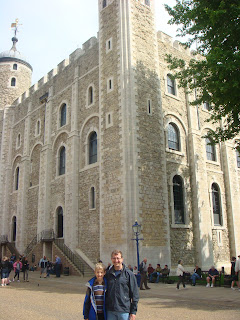 Me at the other side of the White Tower 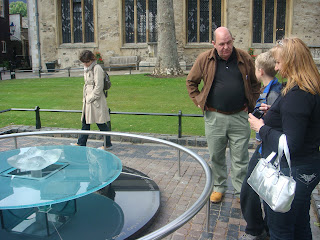 Email ThisBlogThis!Share to TwitterShare to FacebookShare to Pinterest
Labels: England

Please, give me your feedback on my blog. Any suggestions would be greatly appreciated.